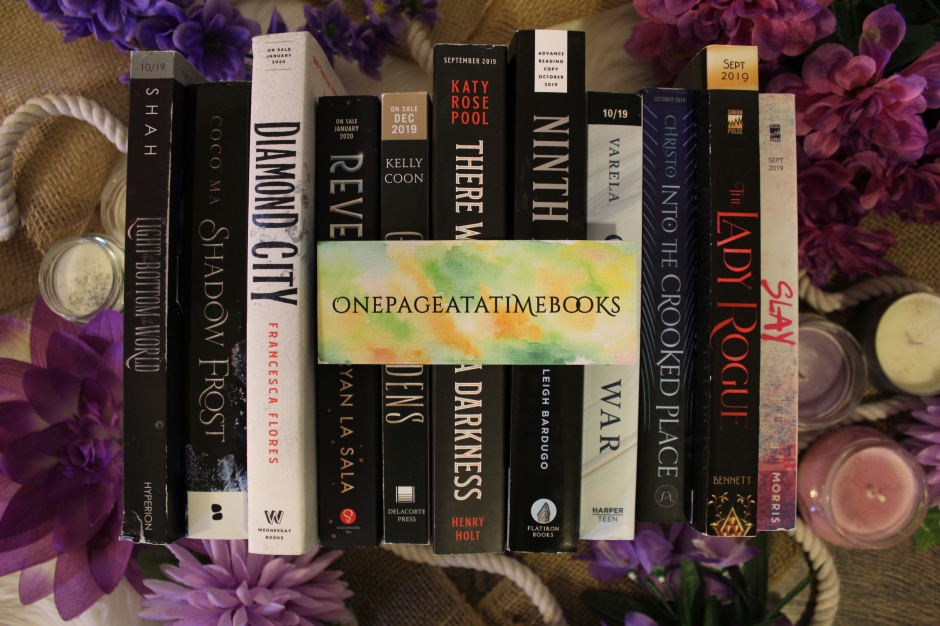 Well Bookworms – it’s official, I am bringing my longer-than-expected hiatus to an end (with this post)! It feels like it has been months since I have sat dawn with my laptop to write a post about anything books related – and since it actually has been months, please forgive me if this post isn’t quite up to my usual standard.

Regardless, I am excited to be back and to be sharing my 2019 Christmas Wish List with any of you who have decided to hang around long enough to see my triumphant return to blogging. Books are one of my favourite gifts to give, and to receive. I especially enjoy gifting books I have read to friends and family, so that we can share and discuss them once they have been read! And since my father and I have a similar taste in books (see: anything high-fantasy), this usually works out! My boyfriend is more into Sci-Fi, so I’ve managed to wrangle him into reading some of my YA Sci-Fi favourites, like The Illumiae Files (Jay Kristoff and Amie Kaufman) or Skyward (Brandon Sanderson).

Anyways, back to my Christmas Wish List! As it is most years, this list is a jumble of recent releases, and older releases (typically from earlier in 2019), that I simply haven’t had a chance to get my hands on. As usual, most of the books on the below list are YA Fantasy, with a dash of Sci-Fi mixed in! 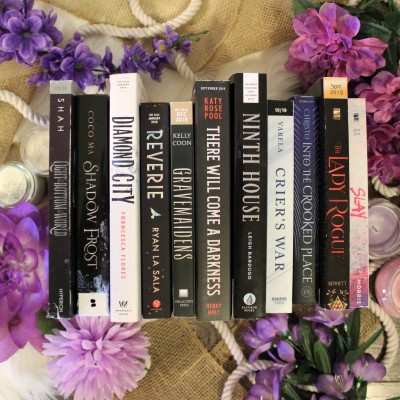 Fans of Susan Dennard’s Witchlands series have fallen in love with the Bloodwitch Aeduan. And now, finally, comes his story. High in a snowy mountain range, a monastery that holds more than just faith clings to the side of a cliff. Below, thwarted by a lake, a bloodthirsty horde of raiders await the coming of winter and the frozen path to destroy the sanctuary and its secrets. The Bloodwitch Aeduan has teamed up with the Threadwitch Iseult and the magical girl Owl to stop the destruction. But to do so, he must confront his own father, and his past.

He will be the destruction of the crown and the ruination of the throne. Power is much easier to acquire than it is to hold onto. Jude learned this lesson when she released her control over the wicked king, Cardan, in exchange for immeasurable power. Now as the exiled mortal Queen of Faerie, Jude is powerless and left reeling from Cardan’s betrayal. She bides her time determined to reclaim everything he took from her. Opportunity arrives in the form of her deceptive twin sister, Taryn, whose mortal life is in peril. Jude must risk venturing back into the treacherous Faerie Court, and confront her lingering feelings for Cardan, if she wishes to save her sister. But Elfhame is not as she left it. War is brewing. As Jude slips deep within enemy lines she becomes ensnared in the conflict’s bloody politics. And, when a dormant yet powerful curse is unleashed, panic spreads throughout the land, forcing her to choose between her ambition and her humanity…

After battling the impossible, Zélie and Amari have finally succeeded in bringing magic back to the land of Orïsha. But the ritual was more powerful than they could’ve imagined, reigniting the powers of not only the maji, but of nobles with magic ancestry, too. Now, Zélie struggles to unite the maji in an Orïsha where the enemy is just as powerful as they are. But when the monarchy and military unite to keep control of Orïsha, Zélie must fight to secure Amari’s right to the throne and protect the new maji from the monarchy’s wrath. With war looming on the horizon, Zélie finds herself at a breaking point: she must discover a way to bring the kingdom together or watch as Orïsha tears itself apart, in this dazzling second installment of the Legacy of Orïsha trilogy.

All her life, Spensa has dreamed of becoming a pilot. Of proving she’s a hero like her father. She made it to the sky, but the truths she learned about her father were crushing. The rumors of his cowardice are true–he deserted his flight during battle against the Krell. Worse, though, he turned against his team and attacked them. Spensa is sure there’s more to the story. And she’s sure that whatever happened to her father in his starship could happen to her. When she made it outside the protective shell of her planet, she heard the stars–and it was terrifying. Everything Spensa has been taught about her world is a lie. But Spensa also discovered a few other things about herself–and she’ll travel to the end of the galaxy to save humankind if she needs to.

At the end of one world, there always lies another. Safire, a soldier, knows her role in this world is to serve the king of Firgaard—helping to maintain the peace in her oft-troubled nation. Eris, a deadly pirate, has no such conviction. Known as the Death Dancer for her ability to evade even the most determined of pursuers, she possesses a superhuman power to move between worlds. Now Safire and Eris—sworn enemies—find themselves on a common mission: to find Asha, the last Namsara. From the port city of Darmoor to the fabled faraway Star Isles, their search and their stories become woven ever more tightly together as they discover that the uncertain fate they’re hurtling toward just may be a shared one. In this world—and the next.

In 1872, New Orleans is a city ruled by the dead. But to seventeen-year-old Celine Rousseau, New Orleans is a safe haven after she’s forced to flee her life as a dressmaker in Paris. Taken in by the sisters of the Ursuline convent in the middle of the carnival season, Celine is quickly enraptured by the vibrant city, from its music to its fancy soirées and even its danger. She becomes embroiled in the city’s glitzy underworld, known as La Cour des Lions, after catching the eye of the group’s enigmatic leader, Sébastien Saint Germain. When the body of one of the girls from the convent is found in Sébastien’s own lair–the second dead girl to turn up in recent weeks–Celine battles her attraction to Sébastien and suspicions about his guilt along with the shame of her own horrible secret. After a third murder, New Orleans becomes gripped by the terror of a serial killer on the loose–one who has now set Celine in his sights. As the murderer stalks her, Celine finally takes matters into her own hands, only to find herself caught in the midst of an age-old feud between the darkest creatures of the night, where the price of forbidden love is her life.

What’s on your Christmas Wish List this year? Let me know! 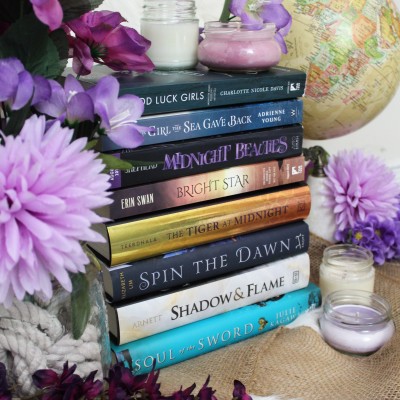 My review for The Stars We Steal by Alexa Donne went live on my blog last week, but for those of you who don’t keep up with my latest blog posts (which you totally should - LINK IN BIO), here’s a mini review of this exciting new YA Sci-Fi novel, set to hit shelves in North America on February 4, 2020! 📚📖 • • • MINI REVIEW: The Stars We Steal was marketed as “the Bachelorette goes to space” and “perfect for fans of Katharine McGee and Kiera Cass”, which had many older YA readers nervous to pick this one up, fearing it to be too juvenile and frilly. Fear not though, readers, for Donne has created a space romance that will appeal to YA Romance readers of all ages, striking an intricate balance between an enemies-to-lovers romance, political intrigue, and familial drama. Throw in a stoic and down-to-earth protagonist, and an endearing cast of supporting characters, and it’s hard to put The Stars We Steal down! 📚📖 #TheStarsWeSteal #AlexaDonne #AdvanceReadersCopy #RaincoastBooks #YAlit #YASciFi #bookstagram #bookish #bookblogger #bookworm #booklover #instabooks #canadalovesbooks #bookishcanadians
A sneak peek at the books that I have read so far during the month of January! I would have a hard time selecting a favourite from this pile - so far I have really enjoyed all my 2020 reads! I am hoping to finish 1-2 more books this week, but we’ll have to see how it goes! 📚📖 #ACurseSoDarkAndLonely #StormFromTheEast#TheStarsWeSteal #TheBeautiful #TheShadowsBetweenUs #IndigoStaffPicks #AdvanceReadersCopy #YAlit #YAfantasy #bookstagram #bookish #bookblogger #bookworm #booklover #instabooks #canadalovesbooks #bookishcanadians #bookstack
While Nameless Queen by Rebecca McLaughlin was on on my January TBR (and my Most Anticipated Books of 2020 List), I didn’t really have the budget to pick it up. So I was so excited when my mum surprised me with a copy of it last week! I’m a bit behind on my January reading goals (and that cursed migraines yesterday certainly did not help!), but I will definitely be digging into this read in the next couple weeks! 📚📖 • • • SYNOPSIS: Everyone expected the king's daughter would inherit the throne. No one expected me. It shouldn't be possible. I'm Nameless, a class of citizens so disrespected, we don't even get names. Dozens of us have been going missing for months and no one seems to care. But there's no denying the tattoo emblazoned on my arm. I am to be queen. In a palace where the corridors are more dangerous than the streets, though, how could I possibly rule? And what will become of the Nameless if I don't? 📚📖 #NamelessQueen #RebeccaMcLaughlin #YAlit #YAfantasy #bookstagram #bookish #bookblogger #bookworm #booklover #instabooks #canadalovesbooks #bookishcanadians #toberead.
So, I had planned to spend today doing some much needed housework and reading (with the goal of finally finishing The Sky Weaver by Kristen Ciccarelli). Instead, I woke up with the worst migraine I’ve had in years, and due to some intense light & sound sensitivity, am now only emerging from the dark, quiet cocoon of my bed. Even looking at my phone, with the screen brightness on low, is a bit much still, so this caption will be short and sweet. Here’s to hoping that a good night’s sleep tonight will help me shake off the last of this migraine! 📚📖 #TheLastNamsara #TheCagedQueen #TheSkyWeaver #KristenCiccarelli #BookishCanadians #CanadaLovesBooks #BookStack #bookstagram #bookish #bookblogger #bookworm #booklover #instabooks #YAlit #YAfantasy #Iskari
“I can survive well enough on my own— if given the proper reading material.” - Sarah J Maas, Throne of Glass 📚📖 • • • This Celaena Sardothien quote from Throne of Glass by Sarah J Maas (@therealsjmaas) is a mood! It’s also a very apt description of my last few weeks of Winter Break! Between reading for pleasure and spending hours perusing curriculum documents to plan and prepare for the return to the classroom, I certainly got lots of reading done! Do you think Goodreads will let me record the Ontario Kindergarten Curriculum as a book read? 📚📖 #ThroneOfGlass #CelaenaSardothien #AelinAshryverGalathynius #SarahJMaas #Bookstagram #Bookstagrammer #BookBlogger #Bookworm #BookLover #InstaBooks #BookishCanadians #CanadaLovesBooks #OpenBook #BookQuotes
I am thrilled with the latest Indigo Teen (@indigo) Book Box! I was so excited to get my hands on this one, and not only because Infinity Son by Adam Silvera (@adamsilvera) was the featured book! As always, this Indigo Teen Book Box was packed with awesome, useful goodies, including a Book Notes journal and Greeting Cards! 📚📖 #InfinitySon #AdamSilvera #IndigoBookBox #Indigo #ChaptersIndigo #YAlit #YAfantasy #bookstagram #bookish #bookblogger #bookworm #booklover #instabooks #canadalovesbooks #bookishcanadians