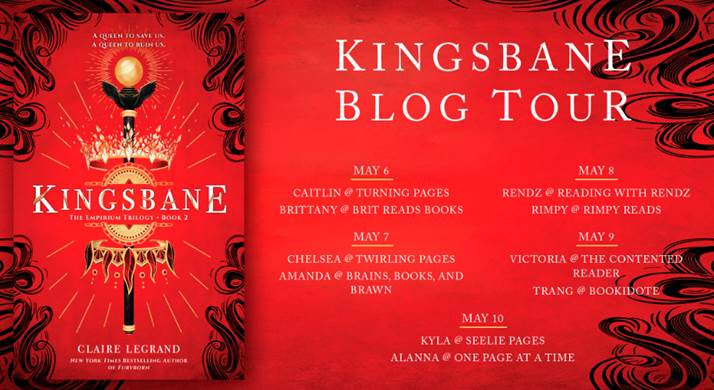 Set to release on May 21, 2019, Kingsbane by Claire Legrand is the second of a planned three books in the Empirium Trilogy. Kingsbane continues the story of two strong, powerful young women who find themselves drawn into an age-old magical prophecy neither of them can escape – even hundreds of years apart.

DISCLAIMER: I received an Advance Review Copy of this book from Raincoast Books in exchange for an honest review.

Rielle Dardenne has been anointed Sun Queen, but her trials are far from over. The Gate keeping the angels at bay is falling. To repair it, Rielle must collect the seven hidden castings of the saints. Meanwhile, to help her prince and love Audric protect Celdaria, Rielle must spy on the angel Corien—but his promises of freedom and power may prove too tempting to resist. Centuries later, Eliana Ferracora grapples with her new reality: She is the Sun Queen, humanity’s long-awaited savior. But fear of corruption—fear of becoming another Rielle—keeps Eliana’s power dangerous and unpredictable. Hunted by all, racing against time to save her dying friend Navi, Eliana must decide how to wear a crown she never wanted—by embracing her mother’s power, or rejecting it forever.

I quite enjoyed Furyborn, so I was quite excited to have the chance to get my hands on Kingsbane early – and after having read this nearly 600-page monster, I am still quite happy about it. In Kingsbane, Legrand continues the in-depth world-building she began in Furyborn. This, along with a powerful villain and fascinating storytelling made for a great read, tempered only slightly by my distaste for Rielle’s character and the alienating nature of the multiple perspectives explored throughout the novel. 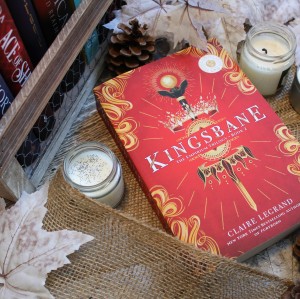 With the scale of the world Legrand is building, it was without a doubt critical for her to develop even the most minute details of both Rielle and Eliana’s worlds – something which she did wonderfully throughout Kingsbane. In Kingsbane, the reader explores far more of both Rielle and Eliana’s worlds than before as Avitas is explored – from Borsvall, to Astavar, and many more places. Beyond this, and perhaps more critically, Legrand delved much more deeply into the history of the world, the angels, and the Saints. Not knowing about the Saints and the magic system was confusing throughout Furyborn, but Kingsbane undoubtedly shines more light on the role of the Saints.

“I bear the life I have been given because it is the only one I have.” – Claire Legrand, Kingsbane

Despite the excellent storytelling and world-building (which really went hand in hand with one another), the characters left me feeling mixed emotions. While Eliana’s character inspired a genuine interest in reading, Rielle’s character felt bland and overdone. In regards to Eliana, Eliana is trying to accept her fate and control her power in order not to make her mother’s mistakes. Throughout Kingsbane, Eliana’s character developed in such a brilliant way that Legrand will undoubtedly succeed at making readers love her more than ever before. Unfortunately, Rielle’s pining for both men in her life, her indecision, and generally childish behaviour make her character borderline despicable – though I suppose that is the path Legrand is trying to lead her down. Beyond the leading ladies of this tale, Corien, Audric, Ludivine, Simon, Harkan, and even Remy make for excellent secondary characters and villains – each with important roles and parts to play in the tale of the Sun and Blood Queen. 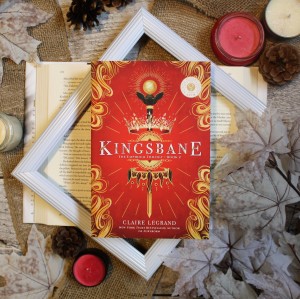 While Rielle’s character was off-putting and difficult to read, it did not truly put a damper on this story for me – for she so surrounded by intriguing characters that it hardly mattered. No, the true damper on this tale was, without a doubt, the plethor of perspectives that Legrand crammed into this story. Kingsbane features not only Rielle and Eliana’s perspectives, but also chapters from the perspectives of secondary characters, such as Corien, Jessamyn, and Simon, among others. This left certain parts of the story feeling sparse, and at times, disconnected.

Despite this, I really enjoyed Kingsbane by Claire Legrand. Eliana’s journey and the trials she faces developed her into a powerful force to be reckoned with, while Legrand’s world-building and the development of secondary characters and villains, such and Corien, Audric, Ludivine, and Simon built an intriguing setting for the conflict between the Sun and Blood Queens. What’s more, the stunning twists and shocking finale will undoubtedly have readers coming back for more (3.5/5).

One thought on “Kingsbane (ARC) by Claire Legrand”