Next up in my reviews of the books I read during my March Break Read-a-Thon is Wicked Saints by Emily A. Duncan, which is set to release in North America on April 2, 2019. Wicked Saints is the thrilling start to Emily A. Duncan’s devastatingly Gothic Something Dark and Holy trilogy.

P.S. A big thank-you goes out to Raincoast Books for providing me with an Advance Reader’s Edition of Wicked Saints by Emily A. Duncan in exchange for an honest review.

A girl who can speak to gods must save her people without destroying herself. A prince in danger must decide who to trust. A boy with a monstrous secret waits in the wings. Together, they must assassinate the king and stop the war. In a centuries-long war where beauty and brutality meet, their three paths entwine in a shadowy world of spilled blood and mysterious saints, where a forbidden romance threatens to tip the scales between dark and light.

Honestly, I am quite torn about this one… Initially, I was hooked by the almost instant action and intrigue, but then the story became somewhat dull and predictable in the middle, before ultimately wrapping up with a messy but exciting conclusion. I liked the characters, but I didn’t love them. I liked the setting, but found the magic system and political intrigue to be under-developed, with Duncan relying too heavily on info-dumping to explain away any potential confusion. But what struck me the most was how familiar this story felt… Almost as if I had read it before.

“We’re all monsters, Nadya,” Malachiasz said, his voice gaining a few tangled chords of chaos. “Some of us just hide it better than others.” – Emily A. Duncan, Wicked Saints

Starting with the characters – namely Nadya, Malachiasz, and Serefin. Nadya is a Kalyazi cleric. This means that she can commune with an entire pantheon of gods, who lend her power in exchange for prayer. She is training in secrecy in the holy mountains by priests who sought to hone the power that sheltered inside her into the one thing that could save Kalyazin from losing the war to its Tranavian neighbours. But a sudden Tranavian attack on the monastery sends Nadya’s destiny wayward, leaving her to navigate a world filled with dangers by herself. Serefin is the High prince of Tranavia and a powerful blood mage. He has been tasked with hunting down a rumoured cleric (Nadya) in Kalyazin, but it is evident that he is more interested in alcohol and avoiding his father, the king. Despite this, Serefin quickly finds himself summoned to his father’s side, forced to constantly look over his shoulder for those who might be in a position to oppose his succession – including his father, the king. The final piece in the game is Malachiasz, a supposed Tranavian defector whose real intentions are shrouded in secrecy. Nadya forms a reluctant alliance with Malachiasz while they’re both on the run from the Tranavian soldiers. I enjoyed all three of the primary characters in Duncan’s tale – though at time a found Nadya to be a bit tiring, and I wish there had been more chapters from Serefin’s perspective, as he was undoubtedly my favourite of the three. 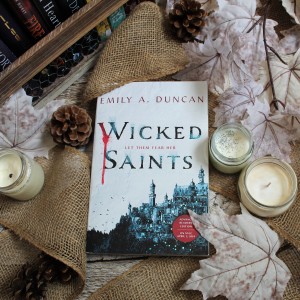 Furthermore, I liked the setting, but found the magic system and political intrigue to be under-developed, with Duncan relying too heavily on info-dumping to explain away any potential confusion. For example, the initial conflict at the monastery had the potential to be action-packed and riveting, but Duncan instead spent far too much time explaining the finer points of Nadya’s magic, rather then letting the magic system unveil itself naturally. The result was a confusing and uninspired battle, which leaves the reader lost and confused (because they spent half the fight reading Nadya’s inner dialogue explaining how her magic works). This was not the only instance of this, though it is perhaps the most stark and straightforward example. This resulted in a story that quickly became somewhat dull and predictable in the middle, before ultimately wrapping up with a messy, but exciting, conclusion. Speaking of messy – after spending so much time establishing clear rules for the magic, Duncan quickly throws these away for convenience, leaving readers not only bored but now confused.

“We both long for freedom. For power. For a choice. We both want to see our kingdoms survive.” – Emily A. Duncan, Wicked Saints

Finally – and this is perhaps my biggest problem with Wicked Saints – I felt like I had read this story before. And the more I thought about it, the more evident it became that Wicked Saints is startlingly similar to Leigh Bardugo’s Grisha Trilogy. Quite frankly, Wicked Saints felt like an uninspired rip-off. That’s not to say that this isn’t its own story – it quite often is – but the similarities are simply too much to ignore. Take, for example, the three main characters – Nadya, a magic-wielder blessed by the gods (a.k.a. Alina), Serefin, the uninspired prince who dreams of a better world (a.k.a. Nikolai), and Malachaisz, the demon belonging to a dangerous order of magic wielders with ulterior motives (a.k.a. The Darkling). Mix in a dash of darkness, Russian-folklore inspiration, and war, and its essentially the same recipe used to create Leigh Bardugo’s Grisha Trilogy. Despite this, I hope that Duncan will take this series in its own direction, because there’s clearly lots of potential here, and the gothic-fantasy setting can easily be shaped into something fresh and new – something entirely its own. 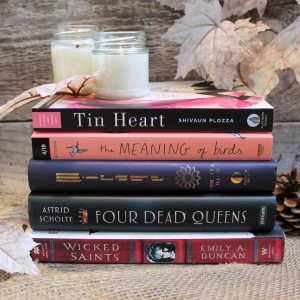 Overall, which I enjoyed reading Wicked Saints by Emily A. Duncan, I couldn’t ignore the fact that the story was messy and altogether too similar to Leigh Bardugo’s Grisha Trilogy for my liking. Despite this, I quite liked Nadya, Serefin, and Malachiasz as characters, and I am excited to see where Duncan takes the story from here (2.5/5).