Years in the making, Sarah J. Maas’s #1 New York Times bestselling Throne of Glass series draws to an epic, unforgettable conclusion in Kingdom of Ash, which was released on October 23, 2018. Aelin Galathynius’s journey from slave to king’s assassin to the queen of a once-great kingdom reaches its heart-rending finale as war erupts across her world… As the threads of fate weave together at last, all must fight, if they are to have a chance at a future. Some bonds will grow even deeper, while others will be severed forever in the explosive final chapter of the Throne of Glass series.

Aelin has risked everything to save her people – but at a tremendous cost. Locked within an iron coffin by the Queen of the Fae, Aelin must draw upon her fiery will as she endures months of torture. Aware that yielding to Maeve will doom those she loves keeps her from breaking, though her resolve begins to unravel with each passing day. With Aelin captured, Aedion and Lysandra remain the last line of defense to protect Terrasen from utter destruction. Yet they soon realize that the many allies they’ve gathered to battle Erawan’s hordes might not be enough to save them. Scattered across the continent and racing against time, Chaol, Manon, and Dorian are forced to forge their own paths to meet their fates. Hanging in the balance is any hope of salvation-and a better world. And across the sea, his companions unwavering beside him, Rowan hunts to find his captured wife and queen – before she is lost to him forever.

After waiting just over two years to finally read the conclusion of this series, I’ll be honest – I was nervous. I have been following Aelin’s story since the very beginning, and I was scared that this last book, through whatever course it took, might diminish my love for the whole series – thankfully, was I wrong. This book felt wonderfully balance, with each character’s story wrapping up in a meaningful, powerful way as they navigated their way through a story so complex only Maas could have woven it.

“They’d walked this dark path together back to the light. He would not let the road end here.” – Kingdom of Ash, Sarah J Maas

I’m going to start this review with a discussion of the characters because, to be quite honest, they’re the best part about this series. These characters were so wonderful – every single one of them, even the ones I’ve hated for the entirety of this series, have such pivotal and potent roles. And Kingdom of Ash is certainly filled to the brim with characters as well – really, it’s almost impressive how this story has grown from the simple misadventures of an assassin, a prince, and the captain of the guard.  From Aelin  and Rowan, to Aedion and Lysandra, Chaol and Yrene, Elide and Lorcan, Dorian and Manon, Asterin and the Thirteen, and  even non-human beings like Abraxos and the King of the North! For this review, I think I’ll focus mostly on the original three- Aelin, Dorian and Choal. That being said, Aelin and Rowan will forever be my favourite characters in this series – the pain, the growth, and the suffering we have seen them endure together is outstanding, as their character growth has been. 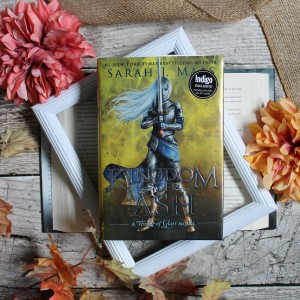 Maas is also an expert at pulling those heart-strings, and Kingdom of Ash is no different – seriously, if readers don’t at least find themselves with tears in their eyes at some point during this book, I would be surprised. Honestly, I’ve never cried so much over a book. Never. There were points were I had to stop reading because I couldn’t see the page through my tears. Over the course of the previous six books, and in Kingdom of Ash, Maas has truly made the reader care about each and every one of her characters – even seemingly inconsequential side characters have important roles to play, and hole small pieces of the readers’ hearts.

“Be the bridge, be the light. When iron melts, when flowers spring from fields of blood—let the land be witness, and return home.” – Kingdom of Ash, Sarah J Maas

The seamless weaving of individual characters’ journeys and of their relationships really comes down to the quality of writing and world building. Love of hate Maas (and it seems there are plenty of readers in both camps), she has woven an impressive tale here. A tale which highlights the prowess of her writing abilities, especially in regards to world building. I am always blown away by the tiny details – information mentioned here or there in books prior, small hints scattered like breadcrumbs throughout the thousands of pages – and by how these tiny details all come together to create a stunning tale that feels whole.

“And together, they would do so, cadre once more. They would fight for this kingdom—their new court. Their new home.” – Kingdom of Ash, Sarah J Maas

As I write this review, I am 23 years old. I started following this story, of Celaena in a glass castle, solving mysteries and fighting duels, when I was 18. Now, at 24, I’ve turned the last page of Aelin’s story, but it doesn’t hurt to say goodbye – not like I thought it would. It feels full, like a beautiful finished painting, a tapestry with every thread neatly tucked away, no rock left unturned, no mystery left unsolved. This series has meant a lot to me, and while it has its flaws, it’s one of those stories that I’ll come back to again. Because the themes are timeless, of bravery and love and healing, of family and redemption and above all, hope. Kingdom of Ash perfectly wrapped up this series, and I simply could not have asked for a better conclusion to Aelin’s story – that is to say, the story of Erilea (5/5).

One thought on “Kingdom of Ash by Sarah J Maas”