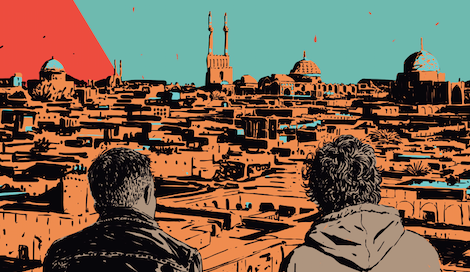 Disclaimer: I received a copy of Darius the Great is Not Okay by Adib Khorram from Indigo Books & Music Inc. in exchange for an honest review.

Darius Kellner speaks better Klingon than Farsi, and he knows more about Hobbit social cues than Persian ones. He’s a Fractional Persian—half, his mom’s side—and his first-ever trip to Iran is about to change his life. Darius has never really fit in at home, and he’s sure things are going to be the same in Iran. His clinical depression doesn’t exactly help matters, and trying to explain his medication to his grandparents only makes things harder. Then Darius meets Sohrab, the boy next door, and everything changes. Soon, they’re spending their days together, playing soccer, eating faludeh, and talking for hours on a secret rooftop overlooking the city’s skyline. Sohrab calls him Darioush—the original Persian version of his name—and Darius has never felt more like himself than he does now that he’s Darioush to Sohrab.

Adib Khorram’s brilliant debut is for anyone who’s ever felt not good enough—then met a friend who makes them feel so much better than okay. And while this book certainly evoked plenty of emotions, and told a brilliant story of friendship, family, and tradition, it lacked a conclusion.

Darius the Great is Not Okay is a story that is entirely character driven, which places a heavy importance on the characters themselves. Darius Kellner is the main character of this story, but his family and his newfound friend Sohrab are also integral players in this story. Darius is what he likes to call a “Fractional Persian” – his mother was born and raised in Iran, but his dad is a white American. And he feels like he’s never fit in anywhere – he’s a big disappointment to his dad, his schoolmates casually throw racial slurs his way, and his depression catches him in loops of negative thoughts when he least expects it, making him feel as though he’ll never be more than an inconvenience. Then, Darius’ family makes a trip to Iran to visit his dying grandfather, and Darius meets Sohrab, the teenage neighbor of his grandparents – and for the first time, Darius begins to feel as though he’s more than an inconvenience. 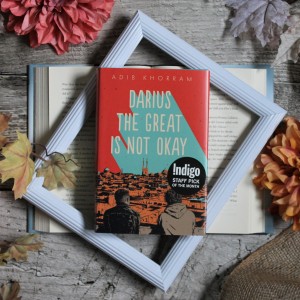 There were a lot of things I really liked about this book, from the representation of mental health to the focus on family, but by far the thing I loved most about the book was the focus on culture. While I am not Iranian, I have had a sneak peek into the world Darius finds himself immersed in – my boyfriend’s family is Baha’i and his stepfather hails from Iran, so I often found myself excitedly calling out at references to tarof, Baha’i celebrations, and city names I recognized, such as Shiraz and Yazd. And I found my heart breaking as I learned more about Sohrab’s family, and the prosecution of the Baha’i living in Iran. Khorram really investigated the role culture and tradition played in Darius feeling like he just didn’t quite belong – both in America and in Iran – and the impact that culture and tradition have had on his life and the lives of those around him.

Overall, Darius the Great is Not Okay by Adib Khorram isn’t a book about the story, or about the conclusion – it’s about finding a place in the world when you feel like you’re nothing but a social outcast. More importantly, it’s about clinical depression. It’s about Darius’ journey as he navigates friendship, family, and tradition (4/5).

“Libraries were full of ideas. Perhaps the most dangerous and powerful of all weapons” - Throne of Glass, Sarah J Maas 📚📖 • • • As someone who, throughout my life, has relied upon libraries to access books, this means a lot to me. Libraries offer books, movies, and music curated to entertain and inform the public. They offer internet access and low-cost printing services. They offer financial literacy training and job search assistance. They serve non-English-speaking immigrants. They serve incarcerated people and homeless people and housebound people. Libraries represent an important cultural belief : that free and easy access to information is important, that cultural enrichment is vital, and that the most underserved segments of our population deserve as much access to information and entertainment as anyone else. 📚📖 #librariesmatter #librarylife #sarahjmaas #throneofglass #librarylove #bookstagram #bookish #bookblogger #bookworm #booklover #instabooks #canadalovesbooks #bookishart #stellabookishart #bookishcanadians #aelinashryvergalathynius #celaenasardothien
“Mock me all you like. Whatever I imagined then, now it is I who would beg and grovel for a kind word from your lips. By you, I am forever undone.” - Holly Black, The Queen of Nothing 📚📖 • • • The Queen of Nothing was the second of my Christmas books that I decided to read! While I haven’t been the biggest fan of the series overall, I did enjoy The Queen of Nothing - if only because it did a wonderful job wrapping up the trilogy. Jude and Cardan’s relationship also finally won my heart in this one, which made the story much more compelling and enjoyable! 📚📖 #TheCruelPrince #TheWickedKing #TheQueenOfNothing #HollyBlack #TheFolkOfTheAir #Bookstagram #Bookish #Bookstagrammer #BookLover #BookBlogger #Bookworm #InstaBooks #CanadaLovesBooks #BookishCanadians #CanadaLovesBooks #YAlit
What have you been reading lately? I’ve actually been reading quite steadily this month, and I have almost emptied my To Be Read Box! Just this pst weekend, I managed to read both Bone Crier’s Moon by Kathryn Purdie (@kathrynpurdie) and Starsight by Brandon Sanderson (@brandsanderson)! 📚📖 #BoneCriersMoon #KathrynPurdie #Starsight #BrandonSanderson #TweetCute #EmmaLord #AdamSilvera #InfinitySon #EmberQueen #LauraSebastian #IndigoStaffPicks #YAlit #bookstagram #bookish #bookblogger #bookworm #booklover #instabooks #canadalovesbooks #bookishcanadians #bookstack
Look what arrived late last week! I have been very impatiently waiting to read Bone Crier’s Moon by Kathryn Purdue (@kathrynpurdie), so I was thrilled when I arrived home from work to discover that this pre-order was waiting for me on my porch! And obviously, I simply couldn’t wait to read it, so now I must once again wait impatiently for the sequel! 📚📖 • • • SYNOPSIS: Bone Criers are the last descendants of an ancient famille charged with using the magic they draw from animal bones to shepherd the dead into the afterlife—lest they drain the light from the living. Ailesse has been prepared since birth to become their matriarch, but first she must complete her rite of passage: to kill the boy she’s destined to love. Bastien’s father was slain by a Bone Crier and he’s been seeking revenge ever since. Now his vengeance must wait, as Ailesse’s ritual has begun and their fates are entwined—in life and in death. 📚📖 #BoneCriersMoon #BoneGrace #KathrynPurdie #YAlit #YAfantasy #bookstagram #bookish #bookblogger #bookworm #booklover #instabooks #canadalovesbooks #bookishcanadians #charlierbowater
"Fear is the path to the dark side. Fear leads to anger. Anger leads to hate. Hate leads to suffering." - Yoda 📚📖 • • • Happy Belated Valentines Day! I had this post all lined up for yesterday, but this cold I can’t seem to shake had me falling asleep as soon as I got home from work, so I completely forgot to actually share yet another photo of this gorgeous little Yoda cookie (created by @kelly.a.dunbar). That being said - what is you number one tip for shaking a pesky cold (namely a very bad cough)? All recommendations are much appreciated! 📚📖 #ValentinesDay #BabyYoda #TheMandalorian #Yoda #CookiesOfInstagram #CookieDecoration #StarWars #bookstagram #bookish #bookblogger #bookworm #booklover #instabooks #bookishcanadians #canadalovesbooks
“They’ve never found the body of the first and only boy who broke my heart. And they never will.” – Tricia Levenseller, The Shadows Between Us 📚📖 • • • Fans of Levenseller’s writing are sure to be delighted by her latest novel, for The Shadows Between Us is a decadent and wickedly addictive fantasy, full of devilishly dangerous schemes, court intrigue, a thoroughly morally grey heroines, and a slow-burning enemies-to-lovers romance that is sure to have readers swooning even as they turn the pages. 📚📖 #TheShadowsBetweenUs #TriciaLevenseller #YAlit #YAfantasy #bookstagram #bookish #bookblogger #bookworm #booklover #instabooks #canadalovesbooks #bookishcanadians #raincoastbooks