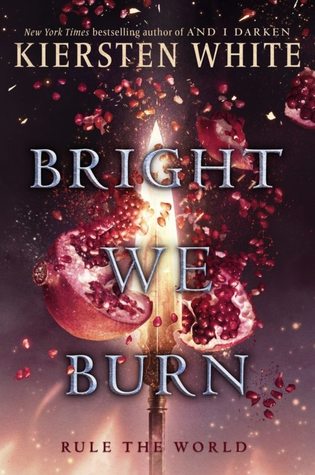 This series has been an incredible journey, and I was both eager and terrified to see how it would end. Unfortunately, I just didn’t love Bright We Burn as a result of disappointing direction the story took, a lack of any real character growth for Lada and Mehmed, and a forgettable conclusion.

As with the previous two books, Bright We Burn is told from the point of view of Lada and Radu – therefore I will focus on their characters, though it is worth noting that I despise Mehmed’s character and remain disappointed in his lack of character growth. Throughout the series, Lada had always been vicious, but she’d been clever about it. She had made a habit of outwitting everyone around her, constantly, and her intentions have always been fair: to pull Wallachia out of the mud and see her people thrive without the shackles put upon them by powerful men like the boyars and Mehmed. But in Bright We Burn, Lada is different – gone is the conniving and brilliant young woman who took from the rich to give to the poor, and in her place is a sloppy warlady who destroys innocents recklessly and stumbles into one trap after another.

However, while my feelings towards Lada’s character turned a bit sour, my opinion of Radu greatly improved. Radu finally begins to see the error of his ways in Bright We Burn, and stops serving Mehmed so blindly as he had. Furthermore, his commitment to fixing his wrongs and serving his family really endeared him to me as a character.

The real disappointment here though was the direction White took with the story and the less than satisfying conclusion. Right from the beginning it felt like Bright We Burn settled into the inevitability of the ending – all the plot twists, who lives, who dies – they were all clearly mapped for the reader from the first few pages – which made the journey to the conclusion feel lackluster and hollow. This inevitability is certain to leave readers, like myself, bored and with a sour taste in their mouth at the end of Bright We Burn.

Overall, Bright We Burn by Kiersten White just didn’t burn as brightly as expected. The story itself was dull, predictable, and capped off with a bland conclusion that didn’t do this series justice (3/5).

One thought on “Bright We Burn by Kiersten White”