A Court of Frost and Starlight by Sarah J Maas, released on May 1, 2018, is a new, original novella in the A Court of Thorns and Roses series that picks up several months after the events of A Court of Wings and Ruin, and will serve as a bridge between that series and Maas’ upcoming series set in the same world.

Feyre, Rhys, and their close-knit circle of friends are still busy rebuilding the Night Court and the vastly-changed world beyond. But Winter Solstice is finally near, and with it, a hard-earned reprieve. Yet even the festive atmosphere can’t keep the shadows of the past from looming. As Feyre navigates her first Winter Solstice as High Lady, she finds that those dearest to her have more wounds than she anticipated–scars that will have far-reaching impact on the future of their Court.

This novella was undoubtedly one of my most anticipated releases of 2018 – despite the fact it is not even a full novel! Anyone who has ever listened to me gush about the A Court of Thorns and Roses Trilogy will know that, like Maas’ Throne of Glass series, these books are something very special to me, and that I truly feel that I can connect with them on a personal level, despite the high fantasy setting. And A Court of Frost and Starlight is no different.

While many may have been let down by the slow-burn of the plot, or the lack of explosive action, I couldn’t help but love this novella for what it was – a beautiful story a healing, family, and growth. This novella also answered some burning questions fans of the series have had since A Court of Wings and Ruin wrapped up, like:

Anyways, I really did enjoy this novella. This tale, as I mentioned, is a beautiful, domestic story that focuses less on world-ending wars and harsh Fae politics (though those undercurrents do rear their ugly head, heeding more dark things to come), and more of how Feyre, Rhysand, and the Inner Circle are healing and moving forward after the explosive events at the end of the war that nearly ended many of their lives. I loved seeing the progression of Feyre and Rhysand’s relationship – and of course, getting the closer I felt that readers deserved. Feyre and Rhysand are my all-time favorite fictional couple (though Aelin and Rowan are not far behind) and seeing them healing and making plans for the future was spectacular, especially after everything they went through to find a place where they and those they care for could be safe, happy, and healthy. 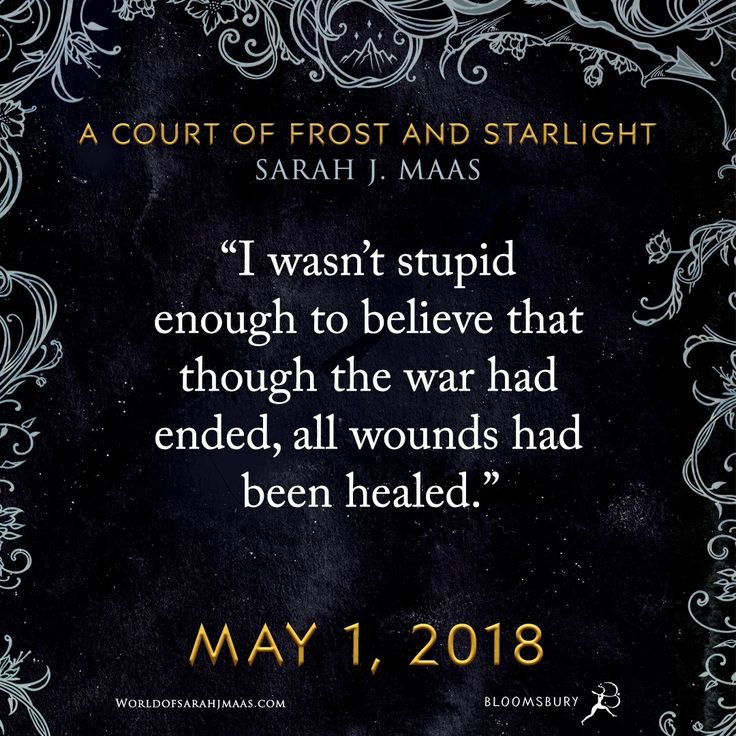 Finally, the epilogue, which set up the story arc for the upcoming series featuring Cassian and Nesta, was nothing short of perfect. Maas set up both characters so well in A Court of Frost and Starlight, giving Nesta’s pain and suffering a path to potential redemption – or ruin – and Cassian a path of his own to finally find his way.

Overall, despite the lack of overt plot progression, I really, truly loved A Court of Frost and Starlight. It had everything a fan of the series could have hoped for – the return of beloved (and despised) characters, a suitable conclusion to Feyre and Rhysand’s story, and the introduction of a new story in Prythian, which promises to be just as wrathful as the last (5/5).