With the release of the third and final book in the Gold Seer Trilogy by Rae Carson, I felt that it was finally time to review the three books in this series. I first picked up Walk on Earth a Stranger when its stunning cover caught my eye in my local bookstore, and from there on in I was hooked. In her newest series, Rae Carson introduces readers to a strong heroine, a cast of intriguing characters, perilous roads, fantastical twists, and a slow-burning romance.

In this review I will provide a mini, spoiler-free review of each individual book, then discuss the series as a whole. 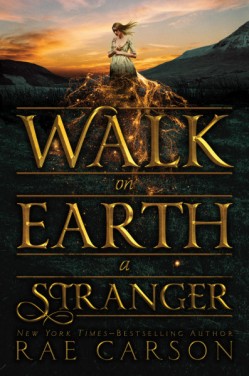 Walk on Earth a Stranger (September 2015)

Released in September 2015, Walk on Earth a Stranger was the first book in a new trilogy from acclaimed New York Times bestselling author Rae Carson. Walk on Earth a Stranger is centered around young woman with the magical ability to sense the presence of gold, and the tale follows her as she must flee her home, taking her on a sweeping and dangerous journey across Gold Rush–era America.

Lee Westfall has a secret. She can sense the presence of gold in the world around her. Veins deep beneath the earth, pebbles in the river, nuggets dug up from the forest floor. The buzz of gold means warmth and life and home—until everything is ripped away by a man who wants to control her. Left with nothing, Lee disguises herself as a boy and takes to the trail across the country. Gold was discovered in California, and where else could such a magical girl find herself, find safety? Rae Carson, author of the acclaimed Girl of Fire and Thorns trilogy, dazzles with this new fantasy that subverts both our own history and familiar fantasy tropes.

I am not typically a fan of slow-burning reads, but Rae Carson really makes it work as she tells Lee Westfall’s story, crafting an compelling plot that is riddled with intriguing characters and spiced up with a dash of the paranormal.

The story, as I said, is a bit of a slow-burn, but it is not without it’s action, and Carson does not wait long to push Lee into what become a torrent of constant adventure. The story itself can only be described as historical adventure, with a paranormal twist to make things even more interesting, and it really works. The journey-style progression of the plot ensures that there is always the opportunity to add new elements of danger and intrigue, while keeping the plot chugging along at a steady pace from beginning to end.

For her part, Lee Westfall is an extremely likable, brave and sympathetic character. The reader will be immediately pulled into her story through her sadness, her anger, and her frustration following the murder of her parents. Her best friend, Jefferson, and the caravan of Gold Rush hopefuls they join along the way, are also just as intriguing. In fact, it is the characters, and the personal journeys they undergo, that are a large part of why this story is so fantastic.

Overall, I really enjoyed this one, and I was so glad when I learned that it would be the first book in a trilogy, not just a stand-alone novel (4/5)!

Like a River Glorious by Rae Carson is the sequel to the New York Times–bestselling and National Book Award longlisted Walk on Earth a Stranger. Released in September of 2016, Like a River Glorious takes us deep into the gold fields as Lee Westfall continues her journey through this sweeping saga of magic and history, becoming unforgettable heroine who must come into her own.

After her harrowing journey west to California, Lee Westfall has finally found a new home—one rich in gold, thanks to her magical power, a power that seems to be changing every day. But this home is rich in other ways, too: with friends who are searching for a place to be themselves, just as she is, and with love. Jefferson—her longtime best friend—hasn’t stopped trying to win her heart. And Lee is more and more tempted to say yes. But her uncle Hiram hasn’t given up his quest to get Lee and her power under his control. When she’s kidnapped and taken to him, Lee sees firsthand the depths of her uncle’s villainy. Yet Lee’s magic is growing. Gold no longer simply sings to her, it listens. It obeys her call. Is it enough to destroy her uncle once and for all?

I did not enjoy Like a River Glorious quite as much as I enjoyed Walk on Earth a Stranger, but I still cannot deny that I found it to be a well-written piece of literature, despite the fact that it suffered from some pacing issues and problematic portrayals.

Unlike its predecessor, Like a River Glorious is a much more stagnant story, with the main cast operating out of two main settings. The plot is painstakingly pushed forward by the actions of Lee’s villainous uncle, Hiram, but at a pace much slower than even the slow-burn that was Walk on Earth a Stranger. In addition, I really missed the rest of the caravan, who were essentially cut from the story following Lee’s kidnapping (with the exception of Tom and Jefferson). The characters were part of what made Walk on Earth a Stranger so utterly engaging, and to have the majority of the cast slashed from the brunt of the story was disappointing.

Furthermore, I can’t avoid mentioning the concerns I had regarding the portayal of the First Nation’s population in this novel. While mostly absent from Walk on Earth a Stranger (excluding one notable encounter, and Jefferson’s mixed heritage), Carson features Native Americans prominently in this one, and I can’t help but agree with Kirkus Reviews, who states that in Like a River Glorious “Native Americans mostly act as the stereotypical backdrop of decimated Indians. By keeping them largely naked and hidden, Carson diminishes the historical Native American resistance against Western expansion in the Sacramento area, and she adds insult to injury by ultimately making them collaborators in Leah’s theft of their land”. While I, as a Canadian, am no expect in the historical treatment of Native Americans in the United States of America, I know that, like in Canada, it was generally despicable, and Carson could have undoubtedly handled this topic and portrayal much more competently than she did.

Overall, Like a River Glorious was an enjoyable read, but did not live up to the sheer wonder that was its predecessor as a result of poor pacing and the problematic portrayal of certain groups of people (3/5).

Into the Bright Unknown

Released in September 2017, Into the Bright Unknown is the conclusion to a thrilling western-fantasy tale that has sprawled from coast to coast, taking Lee and her friends from their everyday lives in the East to lives riddled with danger, deceit and greed in the heart of Gold Rush–era America. With a distinctive heroine and a unique interpretation of American history, Into the Bright Unknown by Rae Carson strikes a rich vein of romance, magic, and adventure – readers will be riveted by the conclusion of this remarkable historical fantasy trilogy!

Leah Westfall’s journey has been one of ever-present peril, hidden magic, harsh realities, loss, life, determination, and love. She has searched for a place to belong and a place—and people—to call home, people who can accept a girl with magical powers that prove to be both blessing and curse. Leah is poised to have everything she ever dreamed of on the long, dangerous journey to California’s gold fields—wealth, love, the truest friends, and a home. Thanks to her magical ability to sense precious gold, Leah, her fiancé Jefferson, and her friends have claimed rich land in California Territory. But their fortune makes them a target, and when a dangerous billionaire sets out to destroy them, Leah and her friends must fight back with all their power and talents. Leah’s magic is continuing to strengthen and grow, but someone is on to her—someone who might have a bit of magic herself. The stakes are higher than ever as Lee and her friends hatch a daring scheme that could alter California’s history forever.

After being disappointed by Like a River Glorious, I am happy to say that I really enjoyed the conclusion to this trilogy. Carson once again finds her rhythm when it comes to pacing this tale, while also managing the return of a full cast of characters and a devious villain (who’s impact is far more powerful than that of Lee’s villainous uncle). Carson also found the time to add some tongue-in-cheek commentary regarding the current politic state of the United States of America, something that not only added to the story, but also connects with the reader on a very personal level.

“It’s all the people who don’t have a say in the government who get hurt by it […] we don’t mean anything to man like him. We can’t stop all of them, but we can stop him” – Rae Carson, Into the Bright Unknown, p. 212

Perhaps the most enjoyable part of this story, ignoring my happiness that the entire caravan was once again featured throughout the tale, was the social commentary that arose from the injustices the group encountered while in San Francisco. Starting with Mrs.Joyner’s inability to reacquire the items belonging to her late husband, simply because an woman cannot own property (she, for all intents and purposes, is viewed as property), and the rage that she, Lee, and the rest of the caravan feel at this injustice. Then, Carson provides the reader with an insight into the harshness that faces the non-White communities in San Francisco – specifically the Black community – after the kidnapping of Hampton, who, even as a Free Man, is imprisoned for the colour of his skin. Jim shows Lee just how large the rift between her privilege and the lack of privilege experienced by the non-White community is, opening Lee’s eyes to a world she rarely experiences so directly. I also very much enjoyed the fact that Lee was not permitted to swoop in as a White saviour, but that she instead allowed the Black community of San Francisco to help Hampton themselves (at their insistance), giving Carson the opportunity to showcase the determination, grit, and rightful anger this community felt towards their oppressors. Finally, through their plight against Hardwick, Carson continually comments on the oppression of women and minorities, and on the tyranny that can arise when a man is given too much money, and power, without any checks on his behaviour.

Overall, I really enjoyed this one – the plan to take down Hardwick ensured that the plot was well-paced, and with the social commentary and re-introduction of the cast I grew to love int he first book, I could hardly put it down (5/5)!

While I enjoyed these books individually, my main complaint about the Gold Seer Trilogy is undoubtedly the feeling of disconnect between the books. While they all follow Lee’s story, I would not hesitate to say that each book could have been a standalone, or that this trilogy could have been a duology. The notion of a duology is especially reinforced by the removal of the primary villain, Lee’s Uncle Hiram, at the end of Like a River Glorious, which made the story feel like it had reached completion. Therefore, as a series, I would have to give this a slightly lower rating of 3/5, simply because the books felt disjointed, and less like a series than I would have liked.