It’s a new day in the Empire. Tyrus has ascended to the throne with Nemesis by his side and now they can find a new way forward—one where they don’t have to hide or scheme or kill. One where creatures like Nemesis will be given worth and recognition, where science and information can be shared with everyone and not just the elite.

But having power isn’t the same thing as keeping it, and change isn’t always welcome. The ruling class, the Grandiloquy, has held control over planets and systems for centuries—and they are plotting to stop this teenage Emperor and Nemesis, who is considered nothing more than a creature and certainly not worthy of being Empress.

Nemesis will protect Tyrus at any cost. He is the love of her life, and they are partners in this new beginning. But she cannot protect him by being the killing machine she once was. She will have to prove the humanity that she’s found inside herself to the whole Empire—or she and Tyrus may lose more than just the throne. But if proving her humanity means that she and Tyrus must do inhuman things, is the fight worth the cost of winning it?

I really wanted to like this book – I enjoyed The Diabolic (enjoyed – not loved), and I was really hoping that The Empress would build upon the sci-fi universe that Kincaid had begun to develop in the first book of this series, while also building the characters into something more. Unfortunately, The Empress was a glorified mess – the plot was confusing and unrefined, the characters remained as shallow as they had in The Diabolic, and the writing remained as mediocre as ever.

Let’s begin with the plot. It felt like several short stories/novellas crammed into one novel with little effort put into cohesiveness or any sort of organization (beyond a chronological one). Honestly, had someone told me this was a collection of novellas set in The Diabolic universe, I would not have been surprised. On several occasions, I felt like I had reached the end of the story – only to realize I had a large portion of the book left. Which meant starting an entirely new story-arc every 100 pages or so. This resulted in a confusing and frustrating reading experience, to say the least. Furthermore, The Empress suffers from the same fate as The Diabolic when it comes to its final conclusion – a rushed ending. Kincaid once again comes up short in the final pages of The Empress by rushing through a jam-packed sequence of action and deception, with very little explanation and even less time for readers to take in what was going on. Most authors, if they do so, info-dump at the onset of the story – Kincaid seems to info-dump at the end, and this just contributed to the overall unpolished feel of the novel.

Anther major problem I had with the plot – and this likely stems from the reason that The Diabolic was initially intended to be a standalone – was the introduction of so many convenient plot points that either pushed the story along through the introduction of the existence, or solves a problem for the protagonists and/or antagonists. For example –  The Scepter (which is never mentioned in the first book) seemed like a concocted problem for a sequel, or the trip(s) to the Sacred City/the existence of the Sacred City as a real, concrete place.

Moving on – the characters. When I reviewed The Diabolic, I said that the characters were mostly enjoyable and memorable (with Sidonia being a notable exception – thankfully, her death removed her from this book!). Unfortunately, that was not the case with this book – characters I really enjoyed in the first book – namely Nemesis and Tyrus – suddenly become whiny, pathetic, unimaginably gullible, and generally just annoying. I mean seriously, how many times can you fall for the same ruse/plot device before it becomes obvious? Any exploration into their emotions and motivations was purely surface level – Kincaid simply stated things rather than delving into them – which also made it very hard to care or feel much of anything for the characters by the end of the book.

Overall, I really wasn’t a fan of The Empress by S.J. Kincaid. It felt like a disorganized, unpolished mess that was thrown together hastily without any real thought for The Diabolic. And while this could possibly be attributed to the expansion from a standalone to a series, there was definitely a better way to go about the expansion of the series than whatever mess Kincaid was allowed to publish (1/5). 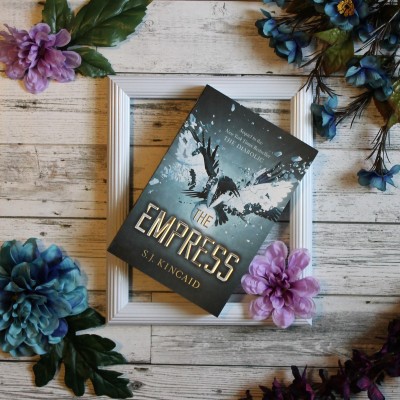