Strange the Dreamer, released in Canada on March 28th, 2017, is the first in a new epic fantasy series by National Book Award finalist and New York Times bestselling author Laini Taylor, of the Daughter of Smoke & Bone trilogy. I received this book as part of the March FairyLoot box, and I am so happy that I did, because it was so much more than I expected!

The dream chooses the dreamer, not the other way around–and Lazlo Strange, war orphan and junior librarian, has always feared that his dream chose poorly. Since he was five years old he’s been obsessed with the mythic lost city of Weep, but it would take someone bolder than he to cross half the world in search of it. Then a stunning opportunity presents itself, in the person of a hero called the Godslayer and a band of legendary warriors, and he has to seize his chance to lose his dream forever. What happened in Weep two hundred years ago to cut it off from the rest of the world? What exactly did the Godslayer slay that went by the name of god? And what is the mysterious problem he now seeks help in solving? The answers await in Weep, but so do more mysteries–including the blue-skinned goddess who appears in Lazlo’s dreams. How did he dream her before he knew she existed? and if all the gods are dead, why does she seem so real? The shadow of the past is as real as the ghosts who haunt the citadel of murdered gods. Fall into a mythical world of dread and wonder, moths and nightmares, love and carnage. Welcome to Weep.

Strange the Dreamer by Laini Taylor is perhaps one of the most original and unique books I have ever had the opportunity to read. From the mystery surrounding the City of Weep, and its lost name, to the blue-skinned Gods, to Lazlo Strange’s own identity, everything about this book was utterly original, enthralling and simply magical. There’s really no other way to describe it.

Many readers have admitted to being unsure about this books in the beginning – it’s true, it’s slow, and it’s strange, and the language is flowery and pretentious. I am one of those readers. But, like many of those readers, I slowly fell in love with the story, the world, and it’s cast of characters, whose stories are heart-wrenching, engaging and utterly human (despite the fact that some of the characters are not, in fact, human). 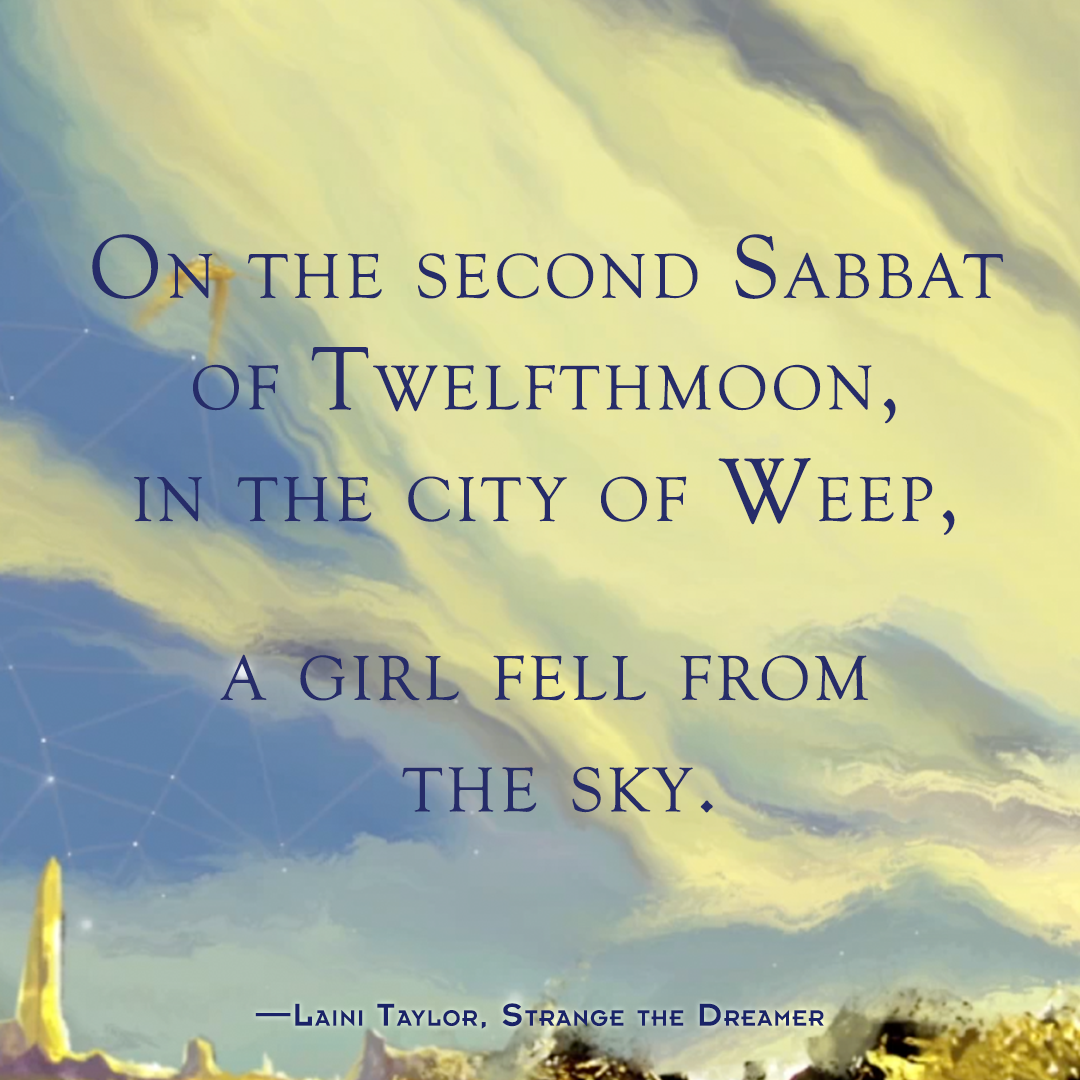 If the quotes you’ve already seen from this book weren’t enough, let me state this plainly: Laini Taylor’s writing is simply wonderful. It is beautiful, powerful, and enthralling, and every word is perfectly placed. Through her words, Taylor weaves a world of magic and intrigue so absolutely that the reader never once questions the presence of blue-skinned gods, or floating monoliths, or any of the other fantastical elements, because the reader is unquestionably drawn into the story, and immersed in the fantastical realm Taylor has weaved with her words.

Furthermore, Taylor’s world-building is very thorough. It is thought out and well-rounded; every detail is immaculately placed, and placed with purpose. And it is so fantastically detailed. Filled to the brim with rich histories of cities, and ancient myths and fables so perfectly crafted they could be myths of our world. They could be the legends of our own childhoods, not simply legends crafted by Taylor. Everything said has a purpose. Everything makes sense for the world Taylor has so carefully crafted. There are laws, rules of magic, classes systems, strange creatures, and it is so incredibly fantastical. And for those of you who have read my previous reviews, you know that I love when magic systems have rules and systems, because in my mind, if magic existed, that is how it ought to be. 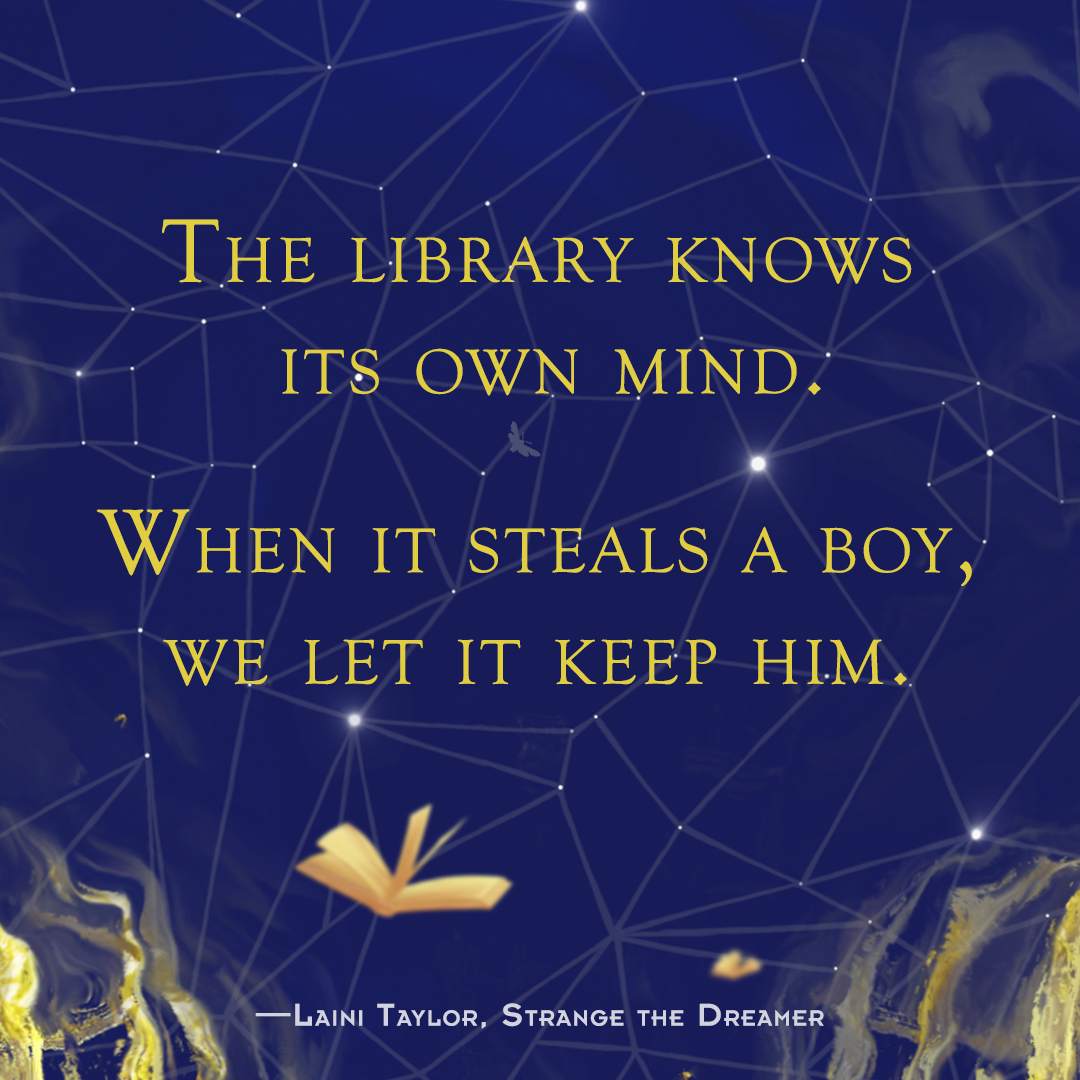 Lazlo, Sarai, the Godslayer… The characters are heartbreakingly human, with fears, desires, struggles, and grudges. They have dreams they feel may never be attained, they have nightmares that wake them from their sleep, and they have regrets like any other human might. The more I think about them, the more their stories affect me. You see whimsy beaten out of a child, when Lazlo is forced to bend to the will of the monks, cowed into a life of servitude. You see happiness replaced with hate, as the blue-skinned children of gods are forced to hide, and in their fear, resent breeds a penchant for revenge and murder. And you see love replaced with loss and agony as Laini Taylor rips out the heart of her readers, by dangling happiness before them until she rips it away at the last moment, turning the world she has so carefully crafted upside down.

But you also see fear replaced by love and trust, as Lazlo and Sarai find one another in their dreams, drifting together as moths drift towards the light. Their romance, incorporeal as it may be (on account of it taking place almost exclusively in their dreams), is no less real – for they love truly, and freely, even if they cannot be physically together. They could be likened to a fantastical interpretation of Romeo and Juliet, in that their relationship is impossible, one being human (…) and one being a hated God. And yet, they transcend the societal barriers to find one another. Strange the Dreamer is also an ode to all those who have dreamed something wild and improbable, but who never truly believed they could ever attain their dream. Lazlo Strange yearned to see the City of Weep, to know its secrets, but never thought his dream would come true. Until it did. And while his dream may not have been exactly what he bargained for, it was what he needed, in order to understand himself, and the reasons behind his never-ending dreaming.

So, overall, I think it’s safe to say that I adored Strange the Dreamer by Laini Taylor. Taylor built a fantastic world that is rich with details and meaning, resonating so true that one might almost believe the legends and the myths to be ones of our own world. She also crafted human, believable characters, with real fears, desires, struggles, and grudges. And all the while, as the reader drifts through gorgeous prose and unparalleled story-telling, Laini Taylor reminds us to dream the wild, and to believe in the improbable, because nothing is impossible, if only one is brave enough to dream (5/5).