A Crown of Wishes by Roshani Chokshi, the much anticipated sequel to The Star-Touched Queen, is set to release on March 28th, 2017. The story follows the (mis)adventures of Gauri, the princess of Bharata, and Vikram, the cunning prince of a neighboring land. Both protagonist have much to fight for, and plenty to lose, as they enter the Tournament of Wishes as unwilling partners (Disclaimer: I received an Advanced Ready Copy of this book in exchange for an honest review).

“Who cares if a story is true or not, so long as it is told?” – Roshani Chokshi, A Crown of Wishes

Gauri, the princess of Bharata, has been taken as a prisoner of war by her kingdom’s enemies. Faced with a future of exile and scorn, Gauri has nothing left to lose. Hope unexpectedly comes in the form of Vikram, the cunning prince of a neighboring land and her sworn enemy kingdom. Unsatisfied with becoming a mere puppet king, Vikram offers Gauri a chance to win back her kingdom in exchange for her battle prowess. Together, they’ll have to set aside their differences and team up to win the Tournament of Wishes – a competition held in a mythical city where the Lord of Wealth promises a wish to the victor. Reaching the tournament is just the beginning. Once they arrive, danger takes on new shapes: poisonous courtesans and mischievous story birds, a feast of fears and twisted fairy revels. Every which way they turn new trials will test their wit and strength. But what Gauri and Vikram will soon discover is that there’s nothing more dangerous than what they most desire (Chapters.Indigo.ca). 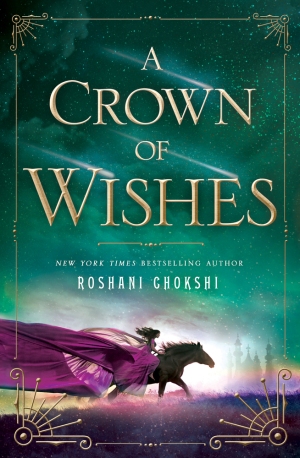 A Crown of Wishes was a splendidly well-written, engaging piece of work, which wove together a complex world of magic with a very human tale of hopes and dreams. Both Gauri and Vikram enter the Tournament of Wishes because they are in need of a wish – to save their thrones, albeit from different threats. This simple motivation is quickly made complex as the reader learns more about Gauri and Vikram’s stories, and by the upside-down Underworld, wherein the rules are shockingly different, and the Tournament of Wishes threatens everything they know. Perhaps my favourite part of the novel was Gauri and Vikram’s interactions, which weren’t simply immediately romantic (as one might expect), but which were as complex and engaging as their characters (and the tension between the two was also highly endearing).

As with The Star-Touched Queen, I simply found some of the magic so confusing and ridiculous that it detracted from the plot. At times, new magic cropped up, seemingly to simply conveniently solve a problem, then vanished again, without explanation or reason. A Crown of Wishes had much less of this particular problem then its predecessor, but it was still something which I found detracted from the story.

Overall, A Crown of Wishes was a brilliantly well-written piece of work, which highlights the quality of Chokshi’s writing and prose, while also presenting engaging characters and very human, relatable problems, even amidst a lawless world of magic. That being said, the lawless magic sometimes over complicated the plot, or felt like a cop-out to an insurmountable problem (though not so much as in The Star-Touched Queen) (3.5/5).