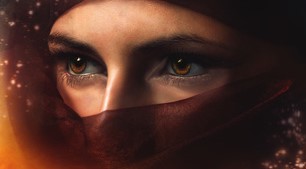 Island of Exiles by Erica Cameron, is the first book in an epic new fantasy series. titled the Ryogan Chronicals, by Cameron, which was released on February 14th, 2017. Thr Ryogan Chronicles is currently predicted to be a trilogy (source), with the second book, Sea of Strangers, predicted to release in December 2017 (Disclaimer: I received an Advanced Reader Copy of Island of Exiles from Entangled Teen in exchange for an honest review).

In Khya’s world, every breath is a battle. On the isolated desert island of Shiara, dying young is inevitable. The clan comes before self, and protecting her home means Khya is a warrior above all else. But when following the clan and obeying their leaders could cost her brother his life, Khya’s home becomes a deadly trap. The only person who can help is Tessen, her lifelong rival and the boy who challenges her at every turn. The council she hoped to join has betrayed her, and their secrets, hundreds of years deep, reach around a world she’s never seen. To save her brother’s life and her island home, her only choice is to trust Tessen, turn against her clan, and go on the run-a betrayal and a death sentence. (Chapters.Indigo.ca)

I simply loved the sprawling nature of this fantasy tale, which immersed readers in a rich, intense, pre-established culture, which is struggling to survive amidst a harsh climate and changing weather patterns. There are (seemingly) no easy solutions to this struggle, and new information emerges at every turn, quickly grabbing the reader’s attention and hanging onto it as the story progresses. Furthermore, the magic system was well established, and while complex and vast, it did not feel overwhelming. Each new power was explained, and each caste of magic-wielder has a title and a role, making it easy to follow along.

Finally, I liked the ease with which Cameron handled to topic of LGBTQ2+ characters in Island of Exiles. They were there, they were part of society, and they were accepted as citizens, no different from any other. Cameron stated the following about Shiara:

“The people who live there are varying shades of brown, from the beige of the sand to a far deeper black. They’re also a people who accept bisexuality as the natural state of being, and they don’t blink at all at nudity, polyamory, asexuality, or gender. There are three sexes and no gender roles.” – Erica Cameron (as cited by LGBTQ Reads)

The diversity of the people Cameron has created in Island of Exiles, and the ease with which they accept this diversity, reflects the idealism of an accepting society we wish we could see in our own world, and challenges the reader to reconsider their own prejudices.

While Cameron certainly did a lot of world-building, and some info-dumping, much of this was very surface level. There is no, or little, explanation for many of the terms given within the story, leaving the reader to play catch up and trying to figure out what everything means. In addition, Island of Exiles is a very, very slow burn, meaning the reader has to do a lot of reading for any sort of pay-off (when it comes to the main plot – there’s plenty of small  snippets of action tossed in, as if to make the reader forget that nothing is happening with Khya’s investigation).

Island of Exiles is a strong debut to a new fantasy series by Erica Cameron, which present a sprawling, diverse world with complex issues and a wealth of magical power. Readers will be ensnared by the scope of the world Cameron is creating, but also a bit confused by the jargon, and perhaps left yawning as the plow through a slow build-up (3/5).

2 thoughts on “Island of Exiles (ARC) by Erica Cameron”