A Face Like Glass is the newest book from author Frances Hardinge, author of The Lie Tree, set to release on May 9th, 2017. Dark, mysterious, and engaging, A Face Like Glass is sure to draw in fans of the genre, and keep them intrigued until the very last page.

In the underground city of Caverna, the world’s most skilled craftsmen toil in the darkness to create delicacies beyond compare—wines that remove memories, cheeses that make you hallucinate, and perfumes that convince you to trust the wearer, even as they slit your throat. On the surface, the people of Caverna seem ordinary, except for one thing: their faces are as blank as untouched snow. Expressions must be learned, and only the famous Facesmiths can teach a person to express (or fake) joy, despair, or fear—at a steep price. Into this dark and distrustful world comes Neverfell, a girl with no memory of her past and a face so terrifying to those around her that she must wear a mask at all times. Neverfell’s expressions are as varied and dynamic as those of the most skilled Facesmiths, except hers are entirely genuine. And that makes her very dangerous indeed . . . 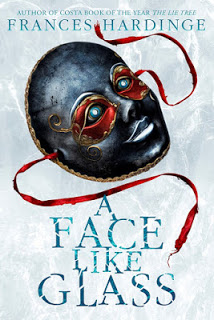 A Face Like Glass by Frances Hardinge was an interesting novel, with an intriguing premise and engaging characters. Neverfell was especially interesting, drawing the reader into her world through her unique perceptions and never ending curiosity about the world around her. Unfortunately, Hardinge fell short when it come to the story, which felt disjointed and jarring (2.5/5).