I picked A Darker Shade of magic by V.E. Schwab up a couple months ago from the Book Outlet, but didn’t have a chance to read it right away due to my busy school schedule. But once I picked it up, I couldn’t put it down- this book is a rare piece of modern New Adult Fantasy which cleverly weaves a daring, complex plot between worlds to create something truly remarkable.

“I’d rather die on an adventure than live standing still.” – A Darker Shade of Magic, V.E. Schwab

Kell is one of the last Travelers-magicians with a rare, coveted ability to travel between parallel universes, connected by one magical city. There’s Grey London, dirty and boring, without any magic, and with one mad king-George III. Red London, where life and magic are revered-and where Kell was raised alongside Rhys Maresh, the rougish heir to a flourishing empire. White London-a place where people fight to control magic, and the magic fights back, draining the city to its very bones. And once upon a time, there was Black London. But no one speaks of that now. Officially, Kell is the Red Traveler, ambassador of the Maresh empire, carrying the monthly correspondences between the royals of each London. Unofficially, Kell is a smuggler, servicing people willing to pay for even the smallest glimpses of a world they’ll never see. It’s a defiant hobby with dangerous consequences, which Kell is now seeing firsthand. Fleeing into Grey London, Kell runs into Delilah Bard, a cut-purse with lofty aspirations. She first robs him, then saves him from a deadly enemy, and finally forces Kell to spirit her to another world for a proper adventure. Now perilous magic is afoot, and treachery lurks at every turn. To save all of the worlds, they’ll first need to stay alive. 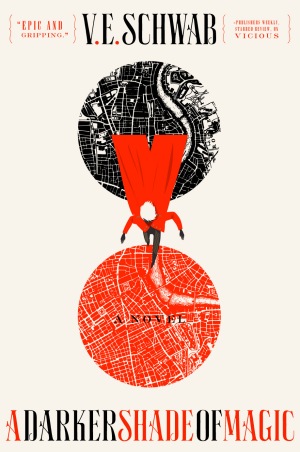 V.E. Schwab dives right into the world (well, worlds, really) of magic, intrigue and deception with a cleverness and complexity which immediately draws the reader in and traps them in a London far from their own, with no token to get home. Schwab quickly builds not one, but three detailed worlds, interweaving magic, language and characters into the fast-paced plot.

Focusing on the characters, V.E. Scwab did not cut corners when it came to developing her primary protagonists, Kell and Lila. In addition, she built a rich bank of additional characters, including Rhy (the promiscuous Prince of Red London, and Kell’s adoptive brother), Holland (another Traveler) and the sadistic Danes twins (of white London).

One thing I  really loved about Kell and Lila was the grey area surrounding their motivations. While they’re clearly being written as the protagonists, they’re hardly shining examples of perfect citizens (being a smuggler and a thief on the run from the law in multiple Londons), and that makes them that much more interesting, and that much more human, simply because they are not perfect by any stretch of the imagination. As Kendare Blake (author of Three Dark Crowns) said on my Bookstagram, “we are grey characters”.

Next, it is important to discuss the writing style and prowess with which V.E. Schwab wrote this book. Every aspect of the plot flowed seamlessly into the next. Specifically, the flow between narrative perspectives was not awkward, while still maintaining a unique voice for Kell and for Lila. Often, multiple perspectives can be awkward if the characters voice shifts are too jarring, or they can be confusing because they are simply too similar; V.E. Schwab found a happy medium, maintaining unique voices without having shifts too jarring.

Finally, it is equally important to discuss the plot of this novel. As I stated above, every aspect of the plot flowed seamlessly into the next. As with V.E. Schwab’s “grey” characters, the plot felt very natural, despite the utterly unnatural setting. The plot felt exactly like something which could have happened, if the reader were in the same position as Kell and/or Lila – disregarding thee obvious Fantasy element. One bit I loved was the villain reveal – while the villains were all introduced early, their true cruelty and vile plans weren’t made fully evident until later, and then their hand in the plot became quite evident, when it earlier hadn’t been. Truly I loved the complexity of this plot, and the way in which it was handled to make it feel more natural.

Overall, I very much enjoyed A Darker Shade of Magic by V.E. Schwab. I found it to be a masterful piece of writing. The characters that were relatable and evoked emotion in the reader. The writing style was well suited to the use of multiple narratives, allowing for distinct voices without confusing. The plot was twisted in the right places, and flowed with relative ease despite the unnatural setting of the tale. V.E. Schwab created something truly fantastic here, and I can’t wait to read A Gathering of Shadows!

One thought on “A Darker Shade of Magic by V.E. Schwab”