I received Vassa in the Night as part of my September FairyLoot box (featured at the end of this blog post for anyone interested!). While this may not have been a book I would have purchased for myself (likely I would have borrowed it from the library as a light read this summer), I still found myself intrigued enough to pick it up shortly after receiving it. And to be quite frank, I was not overly impressed. I walked into Vassa in the Night blind, and walked out disappointed in the experience, and still slightly confused.

In the enchanted kingdom of Brooklyn, the fashionable people put on cute shoes, go to parties in warehouses, drink on rooftops at sunset, and tell themselves they’ve arrived. A whole lot of Brooklyn is like that now-but not Vassa’s working-class neighborhood.In Vassa’s neighborhood, where she lives with her stepmother and bickering stepsisters, one might stumble onto magic, but stumbling out again could become an issue. Babs Yagg, the owner of the local convenience store, has a policy of beheading shoplifters-and sometimes innocent shoppers as well. So when Vassa’s stepsister sends her out for light bulbs in the middle of night, she knows it could easily become a suicide mission. But Vassa has a bit of luck hidden in her pocket, a gift from her dead mother. Erg is a tough-talking wooden doll with sticky fingers, a bottomless stomach, and a ferocious cunning. With Erg’s help, Vassa just might be able to break the witch’s curse and free her Brooklyn neighborhood. But Babs won’t be playing fair…. 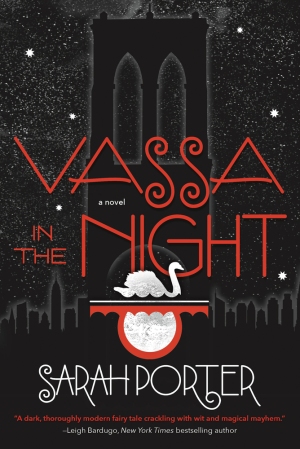 I would not read Vassa in the Night again, nor would I be likely to recommend it to a friend (unfortunately). I went into reading this novel without many expectations, and I still felt let down by the quality of this novel. While it had a very interesting premise, I was let down by the lack of follow through and disconcerted by the disconnect between mood and story. Overall, Vassa in the Night wasn’t what it could have been due to several key problems.

If you want to check out the September FairyLoot box, be sure to continue reading below!

The September FairyLoot box theme was “Magic and Mayhem” and featured a whole bunch of awesome book stuff, including lots of Grisha Trilogy and Six of Crows Duology loot! This is exactly what the box included: