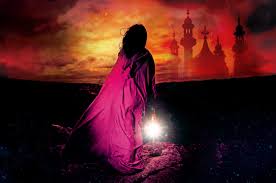 “The stars, filled with cold light and secrets, held no emotion in their fixed language of fate. Emotion belonged to life, a thing the stars could never experience. I, not the starlight, shaped my decisions.” – Roshani Chokshi, The Star-Touched Queen

As some of you may know, I have officially joined the Instagram (or bookstagram) as @onepageatatime_books. I read The Star-Touched Queen as part of the Court of Books and Readers July Reading challenge. I was very excited to read this book – A retelling of Hades and Persephone. Between the combination of its gorgeous cover, raving reviews and the promise of a plot steeped in Indian folklore and mythology, it hardly seemed like I couldn’t like it.

Maya is cursed. With a horoscope that promises a marriage of Death and Destruction, she has earned only the scorn and fear of her father’s kingdom. Content to follow more scholarly pursuits, her whole world is torn apart when her father, the Raja, arranges a wedding of political convenience to quell outside rebellions. Soon Maya becomes the queen of Akaran and wife of Amar. Neither roles are what she expected: As Akaran’s queen, she finds her voice and power. As Amar’s wife, she finds something else entirely: Compassion. Protection. Desire… But Akaran has its own secrets — thousands of locked doors, gardens of glass, and a tree that bears memories instead of fruit. Soon, Maya suspects her life is in danger. Yet who, besides her husband, can she trust? With the fate of the human and Otherworldly realms hanging in the balance, Maya must unravel an ancient mystery that spans reincarnated lives to save those she loves the most…including herself.

I have a love-hate relationship with this book. lately, I’ve found that I just keep being disappointed by the stories in books, especially those of the retelling genre. The Star-Touched Queen, like many others, has a promising premise, plenty of intrigue and a rich background. The writing style is eloquent and beautiful. And yet still, the story itself felt like a rushed patchwork when I came to the end, leaving me feeling somewhat let-down by the conclusion.

To begin with specifics, the characters in this book (of which there were few worth noting) were richly drawn and well fleshed out, which I did enjoy. One distinct complaint I had about the characters was the distinct lack of character development – Maya and Amar are much unchanged, which adds to the monotony of this book.

Personally, it was the middle of the book that ruined it for me. Once Maya becomes the queen of Akaran, the plot meanders and we are taken on repetitive tours of Amar’s palace, which seemingly lead nowhere, since Maya either does not care, or is too dense, to work out the riddles in the air, which the reader works out several dozen pages ahead of her. And yet, somehow, despite this meandering plot, Maya still undergoes hardly any character development, despite this downtime being an ideal opportunity to throw some in.

Finally, the way in which women are portrayed in this book is, generally, very derogatory and negative. I understand that the setting of the tale clearly has some influence on this book, and yet still, I am let-down by the lack of strong female character. Maya herself is easily manipulated and primarily dependent upon the male characters in her life for, well, everything. The majority of the other female characters are concubines of Maya’s father, in addition to being sadistic, cruel and lewd. Truly, the only strong female character in this entire novel was Kamala, and she’s a horse for crying out loud!

This book just wasn’t for me. Perhaps I’ve just become disenchanted with the retelling genre, but I feel that it’s more than that. This book simply lacked depth. While the prose was beautifully written, the story just didn’t inspire any emotion. The characters were initially well drawn, but the lack of development left them feeling flat and uninspiring. I really wanted to love this book, but there was just so little going on that I couldn’t find anything to truly love.

One thought on “The Star-Touched Queen by Roshani Chokshi”

A sneak peek at the books that I have read so far during the month of January! I would have a hard time selecting a favourite from this pile - so far I have really enjoyed all my 2020 reads! I am hoping to finish 1-2 more books this week, but we’ll have to see how it goes! 📚📖 #ACurseSoDarkAndLonely #StormFromTheEast#TheStarsWeSteal #TheBeautiful #TheShadowsBetweenUs #IndigoStaffPicks #AdvanceReadersCopy #YAlit #YAfantasy #bookstagram #bookish #bookblogger #bookworm #booklover #instabooks #canadalovesbooks #bookishcanadians #bookstack
While Nameless Queen by Rebecca McLaughlin was on on my January TBR (and my Most Anticipated Books of 2020 List), I didn’t really have the budget to pick it up. So I was so excited when my mum surprised me with a copy of it last week! I’m a bit behind on my January reading goals (and that cursed migraines yesterday certainly did not help!), but I will definitely be digging into this read in the next couple weeks! 📚📖 • • • SYNOPSIS: Everyone expected the king's daughter would inherit the throne. No one expected me. It shouldn't be possible. I'm Nameless, a class of citizens so disrespected, we don't even get names. Dozens of us have been going missing for months and no one seems to care. But there's no denying the tattoo emblazoned on my arm. I am to be queen. In a palace where the corridors are more dangerous than the streets, though, how could I possibly rule? And what will become of the Nameless if I don't? 📚📖 #NamelessQueen #RebeccaMcLaughlin #YAlit #YAfantasy #bookstagram #bookish #bookblogger #bookworm #booklover #instabooks #canadalovesbooks #bookishcanadians #toberead.
So, I had planned to spend today doing some much needed housework and reading (with the goal of finally finishing The Sky Weaver by Kristen Ciccarelli). Instead, I woke up with the worst migraine I’ve had in years, and due to some intense light & sound sensitivity, am now only emerging from the dark, quiet cocoon of my bed. Even looking at my phone, with the screen brightness on low, is a bit much still, so this caption will be short and sweet. Here’s to hoping that a good night’s sleep tonight will help me shake off the last of this migraine! 📚📖 #TheLastNamsara #TheCagedQueen #TheSkyWeaver #KristenCiccarelli #BookishCanadians #CanadaLovesBooks #BookStack #bookstagram #bookish #bookblogger #bookworm #booklover #instabooks #YAlit #YAfantasy #Iskari
“I can survive well enough on my own— if given the proper reading material.” - Sarah J Maas, Throne of Glass 📚📖 • • • This Celaena Sardothien quote from Throne of Glass by Sarah J Maas (@therealsjmaas) is a mood! It’s also a very apt description of my last few weeks of Winter Break! Between reading for pleasure and spending hours perusing curriculum documents to plan and prepare for the return to the classroom, I certainly got lots of reading done! Do you think Goodreads will let me record the Ontario Kindergarten Curriculum as a book read? 📚📖 #ThroneOfGlass #CelaenaSardothien #AelinAshryverGalathynius #SarahJMaas #Bookstagram #Bookstagrammer #BookBlogger #Bookworm #BookLover #InstaBooks #BookishCanadians #CanadaLovesBooks #OpenBook #BookQuotes
I am thrilled with the latest Indigo Teen (@indigo) Book Box! I was so excited to get my hands on this one, and not only because Infinity Son by Adam Silvera (@adamsilvera) was the featured book! As always, this Indigo Teen Book Box was packed with awesome, useful goodies, including a Book Notes journal and Greeting Cards! 📚📖 #InfinitySon #AdamSilvera #IndigoBookBox #Indigo #ChaptersIndigo #YAlit #YAfantasy #bookstagram #bookish #bookblogger #bookworm #booklover #instabooks #canadalovesbooks #bookishcanadians
“Everyone who remembers his own education remembers teachers, not methods and techniques. The teacher is the heart of the educational system” - Sidney Hook • • • Today I am thinking of my fellow educators all across Ontario - especially those who found themselves on the picket lines today, and those who will be heading to the picket lines across Ontario throughout this week. I don’t know when I will be joining them as of yet, but I do know that I will proudly stand alongside my fellow educators to advocate for quality education in Ontario, for all our students. 📚📖 #ETFOstrong #ETFO #TeachersOfInstagram #TeaIsForTeacher #NoCutsToEducation #Indigo #ChaptersIndigo #Bookstagram #Bookish #BookBlogger #Bookworm #BookLover #InstaBooks #CanadaLovesBooks #BookishCanadians