In this review, I will be providing a brief summary of each book in the Age of Legends Trilogy by Kelley Armstrong, in addition to what I did, and didn’t, like in each book. If you haven’t read all the books, I recommend waiting to read the reviews of the later books until you’ve read their prequel, as the reviews may contain some accidental spoilers here and there.

In the Forest of the Dead, where the empire’s worst criminals are exiled, twin sisters Moria and Ashyn are charged with a dangerous task. For they are the Keeper and the Seeker, and each year they must quiet the enraged souls of the damned. Only this year, the souls will not be quieted. Ambushed and separated by an ancient evil, the sisters’ journey to find each other sends them far from the only home they’ve ever known. Accompanied by a stubborn imperial guard and a dashing condemned thief, the girls cross a once-empty wasteland, now filled with reawakened monsters of legend, as they travel to warn the emperor. But a terrible secret awaits them at court—one that will alter the balance of their world forever.

Overall, This book did not meet my expectations. While all the elements of a great story were there – a fascinating world, interesting characters, and danger galore – Armstrong still came up short because she couldn’t bring them all together into a coherent, enthralling tale. 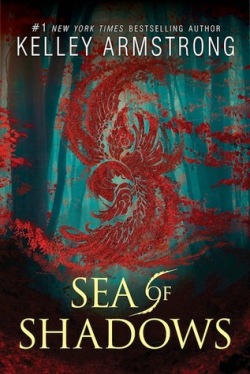 END_OF_DOCUMENT_TOKEN_TO_BE_REPLACED

What have you been reading lately? I’ve actually been reading quite steadily this month, and I have almost emptied my To Be Read Box! Just this pst weekend, I managed to read both Bone Crier’s Moon by Kathryn Purdie (@kathrynpurdie) and Starsight by Brandon Sanderson (@brandsanderson)! 📚📖 #BoneCriersMoon #KathrynPurdie #Starsight #BrandonSanderson #TweetCute #EmmaLord #AdamSilvera #InfinitySon #EmberQueen #LauraSebastian #IndigoStaffPicks #YAlit #bookstagram #bookish #bookblogger #bookworm #booklover #instabooks #canadalovesbooks #bookishcanadians #bookstack
Look what arrived late last week! I have been very impatiently waiting to read Bone Crier’s Moon by Kathryn Purdue (@kathrynpurdie), so I was thrilled when I arrived home from work to discover that this pre-order was waiting for me on my porch! And obviously, I simply couldn’t wait to read it, so now I must once again wait impatiently for the sequel! 📚📖 • • • SYNOPSIS: Bone Criers are the last descendants of an ancient famille charged with using the magic they draw from animal bones to shepherd the dead into the afterlife—lest they drain the light from the living. Ailesse has been prepared since birth to become their matriarch, but first she must complete her rite of passage: to kill the boy she’s destined to love. Bastien’s father was slain by a Bone Crier and he’s been seeking revenge ever since. Now his vengeance must wait, as Ailesse’s ritual has begun and their fates are entwined—in life and in death. 📚📖 #BoneCriersMoon #BoneGrace #KathrynPurdie #YAlit #YAfantasy #bookstagram #bookish #bookblogger #bookworm #booklover #instabooks #canadalovesbooks #bookishcanadians #charlierbowater
"Fear is the path to the dark side. Fear leads to anger. Anger leads to hate. Hate leads to suffering." - Yoda 📚📖 • • • Happy Belated Valentines Day! I had this post all lined up for yesterday, but this cold I can’t seem to shake had me falling asleep as soon as I got home from work, so I completely forgot to actually share yet another photo of this gorgeous little Yoda cookie (created by @kelly.a.dunbar). That being said - what is you number one tip for shaking a pesky cold (namely a very bad cough)? All recommendations are much appreciated! 📚📖 #ValentinesDay #BabyYoda #TheMandalorian #Yoda #CookiesOfInstagram #CookieDecoration #StarWars #bookstagram #bookish #bookblogger #bookworm #booklover #instabooks #bookishcanadians #canadalovesbooks
“They’ve never found the body of the first and only boy who broke my heart. And they never will.” – Tricia Levenseller, The Shadows Between Us 📚📖 • • • Fans of Levenseller’s writing are sure to be delighted by her latest novel, for The Shadows Between Us is a decadent and wickedly addictive fantasy, full of devilishly dangerous schemes, court intrigue, a thoroughly morally grey heroines, and a slow-burning enemies-to-lovers romance that is sure to have readers swooning even as they turn the pages. 📚📖 #TheShadowsBetweenUs #TriciaLevenseller #YAlit #YAfantasy #bookstagram #bookish #bookblogger #bookworm #booklover #instabooks #canadalovesbooks #bookishcanadians #raincoastbooks
“I can survive well enough on my own— if given the proper reading material.” - Sarah J Maas, Throne of Glass 📚📖 • • • What are you currently reading - or planning on picking up next (if you happen to be between books)? I am FINALLY picking up Starsight by Brandon Sanderson (@brandsanderson) tonight, after months of putting it off for fear that it won’t live up to the performance of its predecessor! Wish me luck! 📚📖 #Starsight #Skyward #BrandonSanderson #YAscifi #YAlit #bookstagram #bookish #bookblogger #bookworm #booklover #instabooks #canadalovesbooks #bookishcanadians #canadalovesbooks #bookishcandles #cauldroncandleco
Next up on my reading list is Starsight by Brandon Sanderson (@brandsanderson) and I am definitely excited to dive into this one! I’ve been reading a lot of fantasy lately, so not only will the Sci Fi be a nice change of pace, but I loved this first book in this series, and I have high hopes for the sequel! 📚📖 • • • SYNOPSIS: All her life, Spensa has dreamed of becoming a pilot. Of proving she's a hero like her father. She made it to the sky, but the truths she learned about her father were crushing. The rumors of his cowardice are true--he deserted his flight during battle against the Krell. Worse, though, he turned against his team and attacked them. Spensa is sure there's more to the story. And she's sure that whatever happened to her father in his starship could happen to her. When she made it outside the protective shell of her planet, she heard the stars--and it was terrifying. Everything Spensa has been taught about her world is a lie. But Spensa also discovered a few other things about herself--and she'll travel to the end of the galaxy to save humankind if she needs to. 📚📖 #Skyward #Starsight #BrandonSanderson #YAlit #ScienceFiction #Bookstagram #Bookstagrammer #Bookworm #Bookish #BookBlogger #Bookworm #BookLover #InstaBooks #CanadaLovesBooks #BookishCanadians #BeautifulBooks