“If you wanted to, Safiya, you could bend and shape the world.” – Dom Eron (Truthwitch by Susan Dennard)

I picked this book up on a whim while I was at the book store a couple months ago (mostly because I couldn’t find anything else of interest in the tiny bookstore near my university), and it was one of the best impulse-book buys I have made in years. Honestly, this book is absolutely fantastic. Dennard weaves a wonderfully fantastical, yet believable, world, with an equally intricate plot and well-developed characters.

In the Witchlands, some individuals are born with a “witchery,” a magical skill that sets them apart from others. While the types of witchery vary greatly, some are more common than others. Safiya is a Truthwitch, able to discern truth from lie. 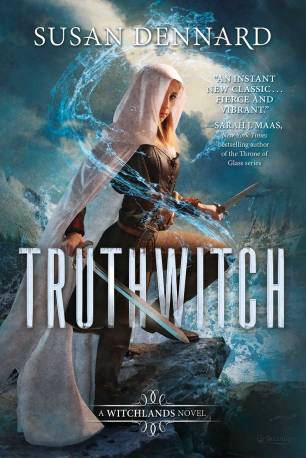 Safiya’s witchery is also the rarest of all. It’s a powerful magic that many would kill to have on their side, especially amongst the nobility to which Safi was born. So Safi must keep her gift hidden, lest she be used as a pawn in the struggle between empires. Her Thread-Sister, Iseu
lt, is a Threadwitch, can see the invisible ties that bind and entangle the lives around her. Iseult is the cool, wary balance to Safiya’s hotheaded impulsiveness; which is always getting them in trouble. After a failed heist, the girls must run for their lives; however, while Safi has her noble blood to protect her, Iseult’s Nomatsi blood damns her. Yet in a shocking turn of events, Safi’s noble blood turns out to be just as dangerous as Iseult’s foreign blood. Once again on the run, the girls must trust the help of the cunning Prince Merik of Nubrevna to get them safely beyond the grasp of a Bloodwitch bent on revenge, Emperors, Princes, Queens and mercenaries, all of who will stop at nothing to get their hands on a Truthwitch.

(NOTE: Potential spoilers ahead! Continue reading at your own risk)

As I mentioned above, Truthwitch was beautifully written. The plot was intricate without being confusing. Too often, I find that authors mistake a complex, intricately weaved plot for a confusing, tangled up plot that ends up falling short because the reader has no idea how they got from Point A to Point B (for example, The Raven King by Maggie Stiefvater). Dennard manages to avoid this pitfall- the story flows logically, with information being revealed to the reader as needed in order to understand the direction of the story. Moreover, Dennard overlays the main plot with that of the mystical Cahr Awen, setting up a story far bigger than the focused plot of Truthwitch, leaving readers wanting more.

Another thing I absolutely loved about this book was the characters. The characters were well-developed, complex and interesting- literally every single character in this book drew my interest, as Dennard ensured they all had roles to play, however minimal. Obviously, I had my favourites (who doesn’t) among Iseult, Safi and Merik.

Overall, I think it’s safe to say that I absolutely loved this book. Really, the worst thing I can say about it is that the sequel won’t be released until January 3, 2017. Which is really horrible, because I am not a patient person and I need more of Iseult, Safi, Merik and the Witchlands in my life, ASAP. So until then, you’ll find me (outside) reading May and the rest of the summer away.

5 thoughts on “Truthwitch by Susan Dennard”